James had his second strep throat this summer right before he turned 10 years old on August 19; consequently, our life was stressful and hectic around the time of his birthday, alternating between Tylenol and Ibuprofen and antibiotics day and night. To make it up to him, we decided to make his birthday a week-long affair so that he got to have a long celebration this year. To make it extra special, we ordered a blackberry pie at Heitzman Traditional Bakery in Louisville. We had never had blackberry pie before, so we thought James’ birthday was a good opportunity to try something new. The Heitzman bakers thought that was an unusual order (they don’t usually make blackberry pies), but they made one for us anyway.

This year I have noticed that James is a lot more grown up than ever before. One time at our dinner table, during James’ sickness, I mentioned to all the boys that I would probably get sick soon. In the past, I always got sick right after James did due to the exhaustion of taking care of him; James tends to make everyone around him miserable when he doesn’t feel well. Hearing me say so, James immediately blurted out, “Mom, I don’t want you to get sick!” I was so touched and surprised by what he said, for it was the first time ever he told me so. I don’t think he paid much attention to whether or not I was sick before now.

Thanks to all family members in Kansas and Kentucky who have helped make James’ birthday so sweet and special this year! 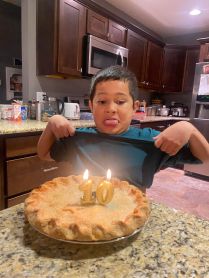 A smitten couple and loving parents in our early 40s. We have lived in 3 different countries together. We dream of living in a fourth country together after our children grow up. We love long walks in the woods, climbing mountains, boating, traveling, reading, and being together. Both David and Lam are old souls who love quietness and meaningful conversations in which we ponder the truth and mysteries of life as well as discuss philosophical and ethical matters. We especially like to enjoy the small pleasures of daily life.
View all posts by David and Lam →
This entry was posted in Family Fun, From Lam's Desk, James. Bookmark the permalink.