Our Fun Time at Kentucky Renaissance Fair in Eminence, Kentucky

Last Saturday we drove to Eminence, KY to go go the Renaissance Fair and had a blast despite the 90 degree heat. It was children and pirates weekend so many attendees were dressed in medieval and pirate clothing. Entry was free for all children.

The fair was set during the reign of Robert the Bruce in Scotland. Jacob and James got knighted by King Robert himself to the ‘huzzah’ of the courtiers and onlookers. They even had their names inscribed in individual knighthood certificates complete with full codes of knightly ethics and conducts.

At the children area, Jacob was treated to a fun story about dragon told and acted out by Robert Barker, a known and published Kentucky’s renaissance enthusiast. We were invited to a Mad Hatters tea party afterwards where the Queen of Hearts made a personal appearance. The main attraction was the knight jousting tournament. We supported Sir Malcolm of the Valley and had an uproarious time cheering him on as well as booing his opponents. Sir Malcolm ended up winning the tournament after defeating 3 other knights on horseback and in close sword fight.

The neatest vendor there has to be the coppersmith from Tennessee. Their copper artworks and fountains are simply spectacular. I dream of being able to afford some of them one day. Perhaps we can buy some at the fair next year.

On the way out, at the Compleat Knight store run by a sweet old man from Sugar Valley, Georgia, we bought Jacob a set of wooden bow and arrows and James a wooden knight sword. The toys are elaborately crafted. The boys are happy! David and the old man conversed at length about banjo playing as he is a long-time banjo player.

It was truly so much more fun than Halloween!!! It was good to visit the sleepy town of Eminence as well. 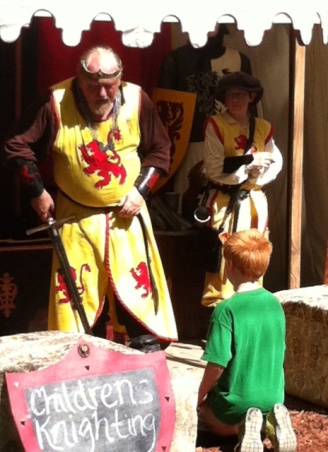 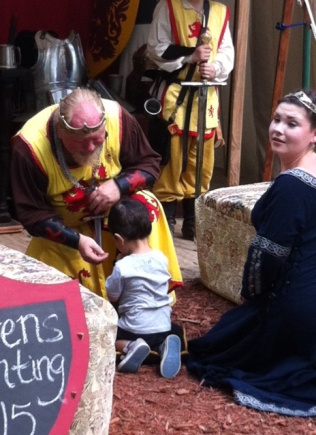 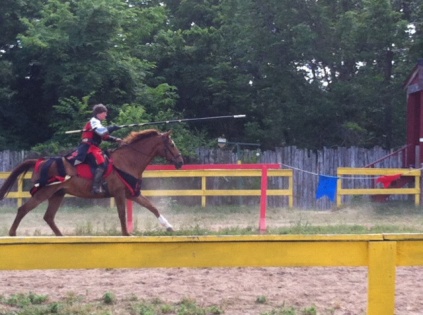 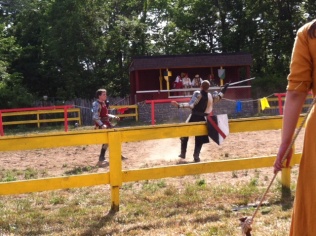 A smitten couple and loving parents in our early 40s. We have lived in 3 different countries together. We dream of living in a fourth country together after our children grow up. We love long walks in the woods, climbing mountains, boating, traveling, reading, and being together. Both David and Lam are old souls who love quietness and meaningful conversations in which we ponder the truth and mysteries of life as well as discuss philosophical and ethical matters. We especially like to enjoy the small pleasures of daily life.
View all posts by David and Lam →
This entry was posted in Family Fun, Faraway Trips and Local Outings, From Lam's Desk, Jacob, James and tagged dragon story, Eminence KY, Kentucky Renaissance Fair, knight jousting tournament. Bookmark the permalink.